Local Biz Happy to Be in a Jam 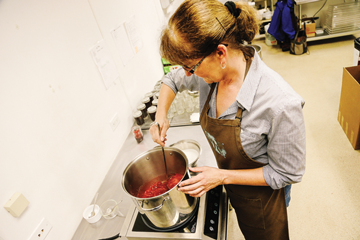 For Lisa Faber, being in a jam has a different meaning. When local fruit- farming productivity fluctuates, so do the flavors of her handmade preserves.

Faber, a Woodstock resident, has been making jams made from local fruits for the past 16 years, but more recently, her jams have made an appearance in chocolates, treats and cocktails at Ethereal Confections on the Woodstock Square.

Though she was semiretired, Faber  joined Ethereal’s team about a year and a half ago, starting in the kitchen roasting cacao beans. She shared samples of her jams with the group, and owners Mary and Sara Ervin began incorporating the flavors into their products. The Ervins supported Faber’s venture and offered her the use of their kitchen to build her Sunshine in a Jar business.

“It’s a great partnership,” Faber said. “They’re very creative, and I’ve learned a lot from being here. It’s a perfect fit in that their philosophy is small batch, artisan, small craft … so the jams fit in with that perfectly.”

“I love that we can support another local business and friend and employee,” Mary Ervin said, who helped Faber design the labels for her jars of jam. “It’s been really nice. Because when we started, we couldn’t find a kitchen to rent, so we’re sort of paying it forward.”

Faber’s other local picks include wild raspberries, black raspberries, concord grapes, Damson plums and mint jelly, which pairs well with lamb and is made from mint leaves that began in her mother’s yard in St. Louis and are thriving in her Woodstock garden.

In the late ’90s, Faber took a solo retreat at the Resurrection Retreat Center, now home to Loyola University Retreat and Ecology Campus on Country Club Road. While walking the trails of the 300-acre property, she discovered a large patch of wild blackberries. After receiving permission to pick the berries, she started making jams for friends and family. 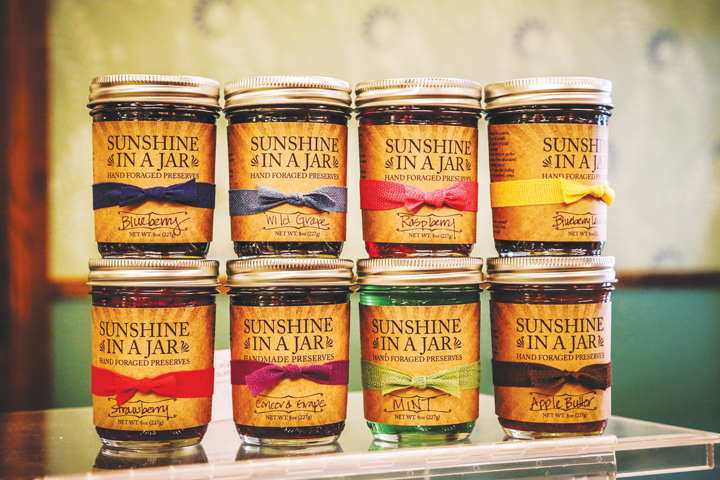 “It became very therapeutic for me,” she said. “I would go out to this beautiful countryside, and it takes about two-and-a-half hours to pick enough berries for a batch of jam. A batch is about six jars. It’s pretty labor intensive, but I really enjoy doing it.”

Her friends and family encouraged her to sell her product, and one friend described it as “sunshine in a jar,” giving the jam its name. Faber’s preserves were approved under the Illinois Cottage Food Industry Act and by the McHenry County Department of Health to be sold at farmers markets. With a variety of local fruits available, she expanded into other flavors.

“What I discovered was that with all the fruit I was gathering, there was about a seven-mile radius from my house,” she said. “I had no idea there was such a variety of fruit in this area. There are blueberries, strawberries, cherries, pumpkins. That’s one of the features of the jam; the fruit comes from McHenry County.”

She has built networks and a support system with McHenry County farmers and most of her fruit comes from Woodstock.

Faber’s jams can be ordered online  at www.sunshinepreserves.com or purchased at Ethereal Confections.
“It’s been exciting. It’s kind of evolved to this point now, and I’m having a great time with it.”